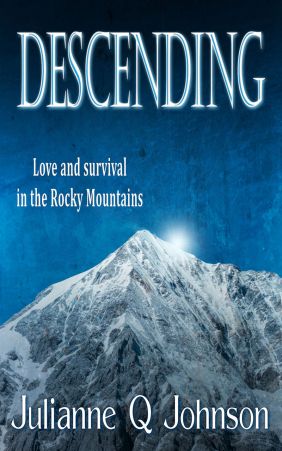 My Action/Adventure Romance novel, Descending, is now available on Amazon and Kindle.

Bitter cold, little to eat, and the small plane lies in pieces.  Jenny Lithart can depend on her theatre coworkers when they’re on the stage, but they know nothing of survival in the Rocky Mountains.  With Jenny’s experience in the great outdoors, and director Tom’s unflappable leadership, the group scrapes by while they await rescue.  If rescue fails, Jenny must chose a hiking companion to blaze a trail to civilization to find help for her coworkers.  Tom is as taciturn as he is intriguing, but Jenny fears he is the best choice.  Jenny and Tom will learn about survival and each other in Descending.

Descending brings to life a realistic nightmare. What would you do if your plane crashed in the Rocky Mountains? How would you survive? Would you know how? Jenny is level headed, which I appreciate in a female lead. There are excellent theater details and metaphors (burning pages of the play for fire, costume shears as a knife/cutting implement) which made the characters feel three-dimensional. I enjoyed the character’s immediate reliance on their memories of books like Into Thin Air and shows like Myth Busters and Survivor Man. That’s exactly what I’d be thinking too! There’s immediate conflict between characters, such as Betsy’s freaking out and doing stupid stuff while Tom and Jenny try to keep her calm and contained. I really hated Betsy. The survivors face one obstacle after another, from finding food and shelter to bears, cougars, and wolves. This was a fun, taut adventure read with some romance thrown in.