Posted on February 16, 2013 by JulianneQJohnson

According to this report, 28% of college graduates produce writing that is rated at deficient. The average American cannot write sufficiently to be understood, let alone well enough that they won’t make my brain bleed. Yet everyone and their dog is on the computer, writing away, and expecting other folks to know what the hell they are talking about. Practically anyone can write, but it takes work to learn to write things that others will want to read.

Now, I’m not slamming on folks that are posting on their social media for friends and family to share their lives and stay connected. No one needs mad writing skills to enjoy this wonderful land of communication that we’ve been blessed with. I am slamming those individuals who are writing stories and articles with such poor writing that any average reader will be appalled. The writers who have made no effort whatsoever to improve their skill, yet expect readers to swoon at the beauty of their art. I’m sure you’ve seen them, lurking in their own comment boards, dismissing the kind efforts of patient readers to help them improve by pretending that the world is full of haters just waiting to rip one’s writing apart.

The particular beast I am speaking of has no interest in honing their craft, only in seeking instant adoration, and is quick to show its teeth when that adoration does not happen. This creature skulks in herds of its own kind, fawning over each other in order to pretend that their art is more lofty than it is. “It has to be good, because my friends who all write the same un-crafted tripe all squeed over it for ages.” (Except that the previous sentence has a comma and some semblance of grammar and spelling.)

For my first example, I turn to the world of fanfic. I’m not slamming fanfic. That’s the world where I went to learn to write. However, like other parts of the internet writing world, about 90% of fanfic is poorly written crap that only the most dedicated can slog through. The other 10% is sometimes so masterfully written that you would throw money at these people in order to read more. We aren’t here to talk about those people.

That is a sterling example of 90% of the writing you will stumble across anywhere on the internet. Lack of punctuation, bad spelling, worse grammar, run on sentences, redundant phrases, and lack of a dynamic voice are all ensconced in this one short sample. I could barely get through this small excerpt, and this is from a novel length story, part one of a series! I shall not post the title, to protect the clueless, but I will tell you that said title has a grammatical mistake and a missing comma.

We all start out horrible. We are all incompetent in the beginning. The wise choose not to post that incompetence all over the net. The foolish not only post it, but look at it through such rose colored glasses that they dub their writing awesome. The foolish are not interested in honing their craft, but only in rushing to the next badly written story.

This article was inspired by a thread on my favorite writing forum. A writer had written a piece to submit to a professional forum, and admitted that no one had ever seen their writing, nor were they interested in having the piece edited. They were so fierce about their belief that other writer’s would “rip it apart just to be hateful,” that I am convinced of two things. One, that they have posted writing before. Two, that they received a lot of well meaning criticism because it wasn’t good enough. Now, instead of using that as a spur to learn to write with grace and style, they’ve decided to hide from any possibility of critique.

Not everyone loved my writing when I started. I was honest and open about my inexperience, and actively seeking ways to improve. My very first fanfic, a novel length story, had over 35,000 views and was translated into three other languages. It didn’t suck. But, because I was open to criticism and eager to learn, I’m better now. Am I teh awesome? Should I have a bevy of fangirl minions squeeing over every keystroke of my laptop? Well, yes, actually, I think a bevy of squeeing minions would be dead useful, but I doubt that I deserve them.

If you want to write, write. If you want to post, post, but with the understanding that people will give you their honest opinion of what you write. If you want to be good, then take the time and the care to learn. I spent 6 years writing fanfic with four talented beta readers and a herd of readers that enjoyed my work but wouldn’t let me get away with lazy crap. I did that, then I wrote my first novel. I’m still learning. I just purchases 3 grammar and style books from Amazon because I have a need to grow and improve. I’m no genius. If I can do this, so can you. All one has to do is stop being a precious princess about it.

I’ll leave you with some good writing, to get the biting-on-tinfoil taste out of your literary mouth from the bad fanfic example.

From Rose Streif’s book, The Bearkeeper, a book of genteel werewolves and dissolute angels. A rich tapestry of a book, which you should immediately purchase and read.

“Full darkness falls after a time, casting the leaves silver with lunar light. There is a strong storm rolling past somewhere in the distant northwest, turning the night balmy with sighs and peals of distant thunder. The call-and-response of whippoorwills echoes along the path of the stream. It makes him yearn for the gathering. Jack can imagine the voices of the backwoods Grays raised up in an old Indian chant, a guilty exhilaration tingling inside him, a memory of wildness and innocence, beautiful and terrible and red as blood and twilight.” 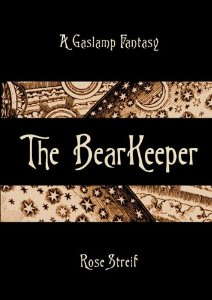 The Bearkeeper, by Rose Streif who is no one’s precious princess.

I am a writer in Indiana who lives with two cats, two ferrets, and one fiance. I enjoy cheap coffee and expensive chocolate.
View all posts by JulianneQJohnson →
This entry was posted in reading, writing, Writing Advice and tagged das krakenhaus publishing, reading, The Bearkeeper, writing, writing advice. Bookmark the permalink.