“With the top let back and the sunshine shining” -Kid Rock

How can one truly describe Disneyland? The Magic Kingdom is not your average amusement park. There’s a reason that 17 million people visit there every year, and even after my recent visit, it’s hard to describe. Maybe I can give you an idea why this is America’s most beloved park by telling you about my fiancé Brian’s experience there. 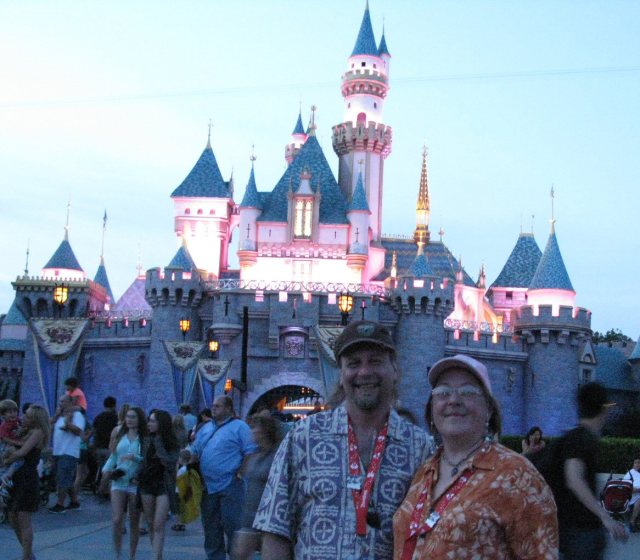 The Sleeping Beauty Castle. With four days to play, we had time to do the walk through, which is charming.

Brian does not like amusement parks. On rare occasions he will go with me to one, but that’s because he does it to please me, not for any desire of his own. He’s been with me to King’s Island in Cincinnati, and Six Flags Kentucky Kingdom before it closed. You should see his face when he’s in these parks. He’s kind to go with me, but it’s clear that he’s putting up with the park, not really enjoying it. He’s a good sport about it, but he doesn’t dig it. 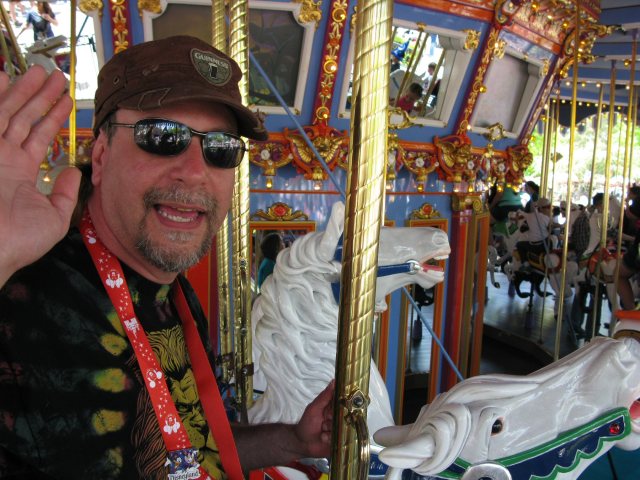 Ok, he put up with the carousel because I wanted to ride it. But he had fun because we always have fun.

My lovely in-laws bought the family 4-day passes to celebrate their 50th anniversary. I was thrilled! I’m used to having only a one day pass for one park. Having four days to knock around Disneyland seemed wonderfully extravagant. There was only one worry on my mind. How was Brian, my amusement park non-enthusiast, going to manage so many days at a park? I had a plan in place. I figured on day three we could take a break and go to the beach. I had a place all picked out. 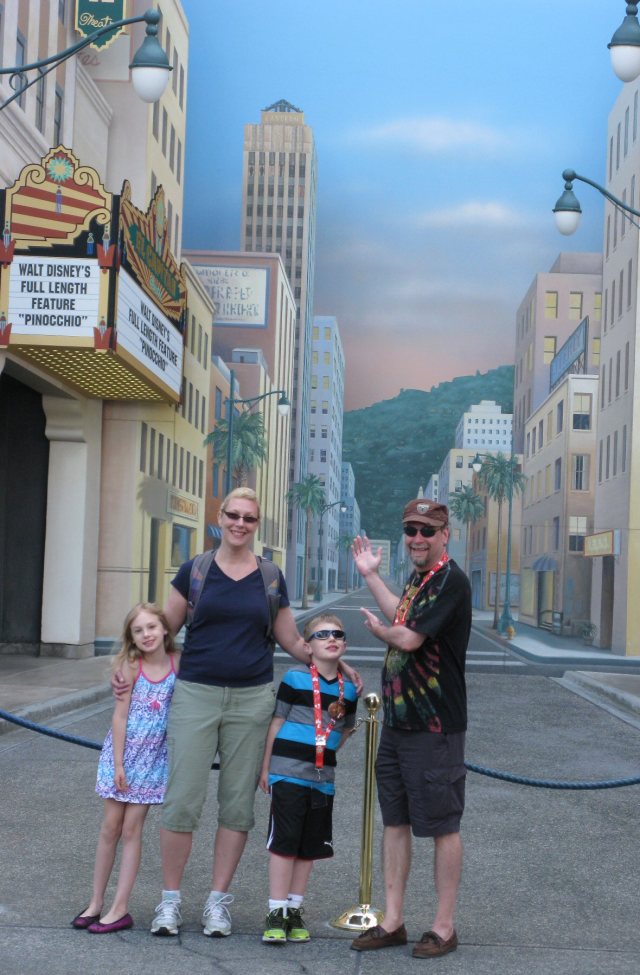 It never happened. We went all the way to California, and Brian still hasn’t seen the Pacific Ocean.

That’s in front of “Small World.” You have to go on Small World. It just isn’t a Disney adventure if you don’t.

Look at that face! That is a happy, happy face! Brian was skeptical about whether he’d enjoy the park for about the first hour. Then he settled in and had a great time. We got up early to get to the park, and shut it down every night.

Nighttime at Pirates of the Caribbean. Bad picture, good memory.

Now, we had some first-time visitor luck. We had a bit of magic to start out. We went in for the first time Easter Sunday evening. There were fireworks and light shows and parades. It was the perfect time to ride rides. Having been to the park before, I knew exactly what I wanted to show Brian. The Haunted Mansion, Pirates of the Caribbean, and Star Tours. My favorite things at Disney. One ride inspired by a movie, and two that are so cool they inspired movies. We had the first-timer magic. We went on the Mansion and Pirates twice, and Star Tours once, and I don’t think we stood in line more than ten minutes for anything. We came out of one ride, and ran right into one of the light shows, which was fascinating and enchanting, like most things Disney. It was a magical, lucky night, and a great way to start our adventure.

That Ferris wheel is a hoot to ride if you’re in one of the swinging cars.

Brian loved every minute of it. Disney rides aren’t like ones at other parks. You don’t just ride around, they tell a story. There’s so much to look at that you can ride something twenty times and still see something new. It is “the happiest place on Earth.” You walk through the park and look around, and you begin to notice something. Crying children are nearly non-existent. Angry or rude adults are rare. You look around and you see a sea of smiling faces. These faces might begin looking tired later in the day, but they still smile. Strangers will strike up a pleasant conversation with you. Your only worry in the world is how long the lines will be for that ride you want to go on.

On the train, Jim, Tom, Fran, and Dennis. Happy faces! Such a great place to spend time with family!

There were some changes in the park since I was there twenty-plus years ago. It’s two parks now that they’ve added California Adventure. There’s also this great thing called a “Fast-Pass.” I won’t try to describe it, you can google it, I’m sure. But FP can make sure that you get to go on that favorite, popular ride and that you don’t have to spend hours in line to do it. Unlike other parks, this service is free. Because of it, Brian and I got to go on two very popular rides in California Adventure without losing half the day with waiting in line. Soarin’ Over California makes you feel as if you can fly, and Radiator Springs Racers is a perfect Disney mash-up of a ride that tells a story and a low-key roller coaster. If we’d had to spend hours waiting, we might have missed two wonderful ride adventures. It was wonderful to have four days to explore. We had time to go on things that I usually skip for the flashier rides, like the Mark Twain riverboat.

Radiator Springs Racers. Yes, it’s calm for younger kids, but you adults do not want to miss this ride!

The Mark Twain. They use this boat and the Columbia in the awesome light show.

The best part of our Disney adventure? Sharing it with Brian’s family. My sweetie’s family is spread out across America. We don’t get to see them nearly enough. In fact, this was the first time that we got to meet Brian’s adorable and charming niece and nephew. What a great place to meet them! It was four days of fun, family, and food, and both Brian and I enjoyed every minute of it. So much so that we had Disney withdrawal when we left. Brian said it best. “I don’t know what to do with myself today. We usually get up, eat, and then walk across the street to Disneyland.”

So why is Disneyland such a magical place? Why did even my amusement park hating fiancé have a great time there? Why is Disney better than the other parks?

My fantabulous in-laws, Fran and Tom, on the Ferris wheel.

Because it is. The detail and thought that goes into each ride is something that other parks don’t even try to do. They aren’t rides so much as they are experiences. The food is better than other parks. I had a churro almost every day, simply because they were the best churros I ever had. The weather was perfect, sunny and beautiful every day, as California usually is. Customer service is better than other parks. There are cast members just standing around throughout the park, ready and willing to answer questions and give you directions. Throw all of that together, and it is the happiest place on earth. Disney is the kind of park that other parks wish they were.

We were there recently, and if I could, I’d turn around and go right back. Astonishingly enough, so would Brian.

Brian loved every minute of it. We may turn into one of those couples that goes to Disney every year.

I am a writer in Indiana who lives with two cats, two ferrets, and one fiance. I enjoy cheap coffee and expensive chocolate.
View all posts by JulianneQJohnson →
This entry was posted in Disneyland, The Magic Kingdom, Vacations and tagged Family reunion at Disneyland, Going to Disneyland with an amusement park hater. Bookmark the permalink.