“There is art and there is entertainment. They are not necessarily synonymous. The human animal would rather watch “fails” on YouTube, than to consider the merits of good story.” -a commenter on another blog, nameless to protect the innocent.

Is it just me, or does the above statement seem pompous and maybe even a little butt-hurt? I imagine that someone in the writer’s life has put their work aside in favor of watching some reality show. I’ve run into the idea that art is far better than entertainment for some time. I worked most of my life in the theatre, and there’s a lot of art talk there. I also spent my life reading and being involved in literature, and boy is there a whole herd of literary folks who value art for art’s sake and wouldn’t pee on entertainment if it were on fire.

Today, we take a break from my adventures out west to discuss art versus entertainment. 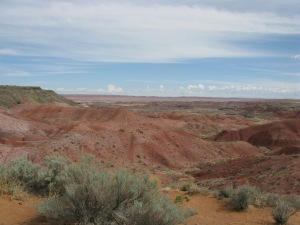 Pictured: a world without entertainment.

I find art for art’s sake, for the most part, to be at best heavy-handed and at worst self-masturbatory crap. Yes, artists of all types can wallow in their art and create something that is born to show off every bit about art that they have ever learned. These pieces might be masters of technique, but why does that make them inherently better than pieces made to entertain?

Now, I’m about to offend some readers. I’m about to say non-complimentary things about one of music’s legends. You have been warned.

Jimi Hendricks. My fiancé and I have had an argument about Hendricks that has lasted two decades. There is no doubt that Hendricks is perhaps the most technically proficient guitar player of our time. My problem with Hendricks is that his music sounds like he’s trying to show off more than make good music. In his drive to showcase his art, I feel that he has let his guitar overpower the music. It’s as if he didn’t care how the music sounded as a whole, he just wanted to show people how awesome he could play, full stop. 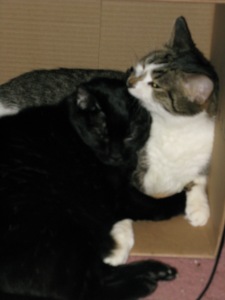 “Jimi Hendrics is better than Carlos Santana!”
“No he isn’t!”
“Say Hendricks is better, or I’ll bite you!”

Who would I rather listen too? Carlos Santana, for one. Santana makes that guitar sing, yet at no time is it overpowering the beauty of the song itself. Carlos would let his proficiency take a back seat in order to create music people want to listen to, music to give people a bit of joy.

Why is one ideology better than the other? Why is Hendricks’s goal of art any more valuable than Santana’s goal to entertain? I find that it’s more a difference of style than of merit. Certainly art is important, but so is entertainment. High art should not be considered loftier solely because of its willingness to forget it has an audience. High art can be a goal to which we attain, or it can simply be self-indulgent. That does not make it intrinsically more valuable.

I’m also not saying that entertainment is the end all, be all of what we should be trying to achieve. When I was younger, it was rare to know someone who watched little or no television. Such people usually had an agenda of some sort, and liked to tell you all about why they didn’t watch TV. Nowadays, I know quite a lot of folks who avoid commercial television. They get their shows from the internet, Netflix and the like. The reason for this seems to be the deluge of reality TV shows. Why channel surf through oceans of bad reality shows looking for the rare Big Bang Theory, or Penny Dreadful, when you can surf the net and watch exactly what you want, when you want. I’ve heard people speak of reality TV as if it’s the entertainment side of the spectrum run amok. I disagree. These shows aren’t being produced by the hundreds because the audience finds them highly entertaining. They are produced because they are cheaper. Take a look at any top ten TV shows list on the net, and you won’t find much reality TV on there. 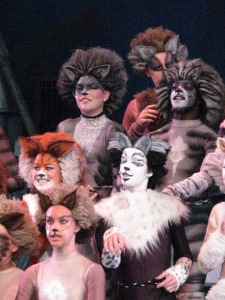 I’d rather watch cats sing and dance than most reality television.

I bring up reality TV because when I say that entertainment has as much value as art, I’m not talking about Duck Dynasty. That’s not entertainment, that’s a product that is made solely because it is cheap to do so. Buffy the Vampire Slayer is entertainment.

“What? Juls, you can’t possibly be telling me that Buffy has as much intrinsic value as James Joyce’s Finnegan’s Wake?”

I can and I am. Yes, Joyce was a master of his art. However, to put his art as more valuable than art created to entertain is snobbish, in my opinion.

I learned to write by writing fanfiction, as I have mentioned before. My stories grew popular, and at one time I had 30,000 hits on my stories. I can’t give you a precise number of readers, because I don’t know how many of those hits were re-reads. I also received oodles of comments on my stories. The ones that meant the most to me went something like this:

“I was having the most horrible day. When I got home, I wanted to just go to sleep and never wake up. Then I saw that you had posted a new chapter. Thank you so much! It really made my day better!”

That. That is why I write to entertain and I don’t give a crap about high art. Yes, I try to improve my writing with every project I undertake, but I will never write literary fiction. I don’t want to. If what I’ve written makes even one person’s bad day a little brighter, then I am more than content. Hell, I’m thrilled.

The idea that a piece of art is more valuable to the human condition than that gif of the giggling penguin that gives us a chuckle when we most need it is flawed. The ability to take people out of a bad moment and lighten their load should never be undervalued. Intellectual gifts are no more important than emotional ones. 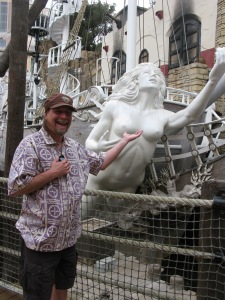 It’s kind of like my photographs. I’m no artist with a camera, I’m just posting them to entertain. This one makes me giggle.

We all have our lines drawn in the sand. I have one too. To me, the vast sea of reality shows hold little value. That is because most are not made to entertain as much as they are made to cost less. They are the fast food of entertainment, cheap and unfulfilling. Despite how many exist, they are not actually that popular. There are certainly exceptions. There are reality TV shows that have a higher level of quality. It seems to me that the TV audience is getting tired of them altogether. On social media like FaceBook, I don’t see people gushing over the newest episode of any reality show. They save the gushing for non-reality shows.

True entertainment has an inherent level of art. When I think of entertainment, I think of Buffy, Castle, Dean Koontz, and Lillian Jackson Braun. Artists and works that have experience and art in their backbones, but who do not put that art above the value of entertainment. It’s not just fart jokes and people falling down that lifts people up when they most need it, though there is a time and place for that too. 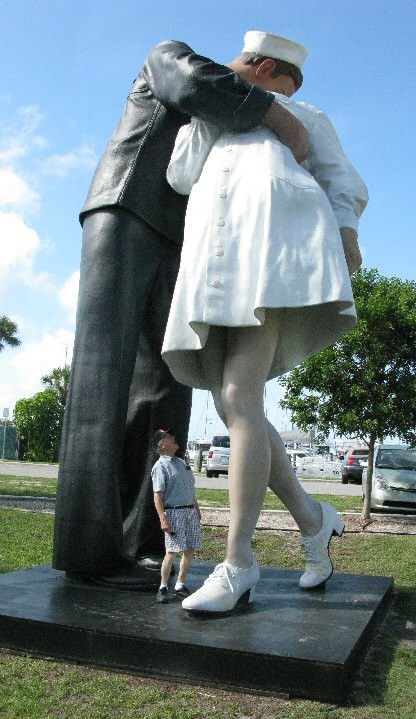 This giant and ugly statue is art. My dad looking up the statue nurse’s skirt? Now that’s entertainment!

The next time you have a really stinky day, pay attention to what you reach for. I’m betting it won’t be Joyce. How can anyone say that entertainment isn’t truly valuable?