Poetic License vs. Being Nonsensical

Posted on August 19, 2015 by JulianneQJohnson

Poetic license is a very real thing in writing, one that should be utilized and embraced. In moderation, of course, like -ly adverbs. It can be useful, powerful, even lyrical to use an element of poetic license.

First off, let’s define poetic license. From the dictionary: license or liberty taken by a poet, prose writer, or other artist in deviating from rule, conventional form, logic, or fact, in order to produce a desired effect.

That’s it in a nutshell. It’s a form of art where writers take liberties with various aspects of language and grammar. It sounds rather naughty, doesn’t it? However, it’s an important element of writing style. Writing style isn’t about grammar rules, it’s about knowing when to bend them. Without style, our novels would read like business documents.

While this window is beautiful, sometimes we want our art to be less vigorously structured.

Poetic license gets its name from poets, who bravely sacrifice grammar, spelling, and sense to make their work take its proper shape and sing. They make up words and ignore proper usage in order to make it sound right to their ears. Take a look at Lewis Caroll’s Jabberwocky , or Coleridge’s Rime of the Ancient Mariner to see poetic license run amok in all its twisty glory.

Watch out, Mushu! The Jabberwocky is going to eat you!

Now, writers of prose use a bit of poetic license as well. Our narrators, for example, may sound like how a character speaks instead of a bastion of proper English grammar. We may throw out rules of grammar in order to make the prose “sound” right. That’s all well and good, and keeps us from writing something that sounds like a physics term paper.

However, when reading one’s work, one needs to make sure that their more poetic choices are poetic…and not fucking nonsense.

I was reading a trashy story today, (I do enjoy an occasional bon bon for the mind.) and doing my best to ignore some bits of writing that were not quite up to par, when one of the characters “moaned silently.” That’s not poetic license, that’s rubbish. No one can moan silently, and if you try to have one of your characters manage this Herculean task, the reader is going to stop reading and start muttering “What the fuck?”

There’s no better way to throw a reader out of a story than to write something that makes no sense whatsoever. The very instant that you do this to a reader, you are giving them a moment to pause, and decide whether they want to keep reading your words or not. Am I reading that trashy story right now? No, I am writing a blog post instead. That writer put words together in a nonsensical fashion, threw me out of the story, and gave me a chance to make a decision. My decision was, “No, thank you. I do not want to read any more of your words.”

Don’t write a phrase simply because it sounds nice. Sometimes a writer can use a phrase like “bright darkness” to good effect, but no one can moan silently. They can stifle a moan, or bite one back, or smother it in a pillow, but they cannot moan silently. It’s a lazy, unclear, and non-descriptive choice. Don’t write lazy! Make the things your character does, and the things they say, make some sort of sense. Use poetic license, but use it intelligently; use it frugally. Make certain that you have a reason for it, and the reason should never solely be because it sounds pretty. 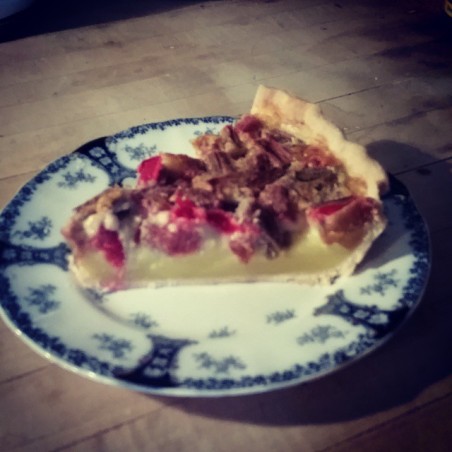 It’s not enough for food to look pretty, it has to taste good as well. There has to be substance underneath the surface.

Don’t make you characters try to talk while smiling! It’s difficult and awkward. No one apart from pageant contestants talks while in the midst of a jaw-breaking smile. Take your time and write what you mean.

“What do you want to do?” His tone of voice was innocent enough, but the way he smiled at her while she attempted to make up her mind was anything but.

Not a stellar example, to be sure, but it beats the pants off of “he asked, smiling.”

I am a writer in Indiana who lives with two cats, two ferrets, and one fiance. I enjoy cheap coffee and expensive chocolate.
View all posts by JulianneQJohnson →
This entry was posted in poetic license, writing, Writing Advice and tagged poetic license is not a reason to write badly, using poetic license effectively, writing, writing advice. Bookmark the permalink.

6 Responses to Poetic License vs. Being Nonsensical