I cut my writing teeth on fanfic. Fanfic has its place and its purpose in the universe. Honestly, haven’t you ever been so inspired by a writer’s world, or character, or plot, that you wished it would never end? In fanfic, it never ends. Fanfic is meant as compliment to an author. “You took me to a place I wasn’t ready to leave, so I didn’t.” 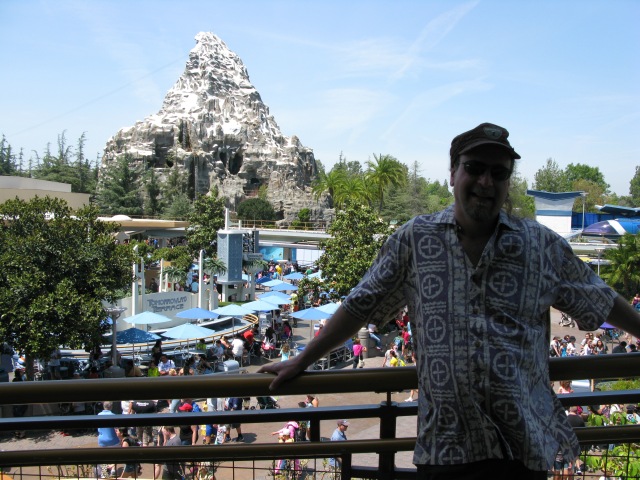 Much like how Brian and I went to Disneyland and didn’t want to leave.

There is also fanfic that’s been published. There are some writers and publishers that have opened their worlds to fanfic writers to play with. There’s a whole section on Amazon for these stories. The key idea being, that the writers have been given permission from the owners of those literary worlds.

And why not? Published fanfic has been with us for ages. What do you think all of those Star Trek novels were? Ditto for Star Wars, Forgotten Realms, etc. The list goes on and on. I myself have a two-volume set of published Buffy the Vampire Slayer short stories by various authors. Fanfic isn’t new. I imagine that when Homer wrote The Odyssey some other writer was so taken with it that they wrote a story about it. 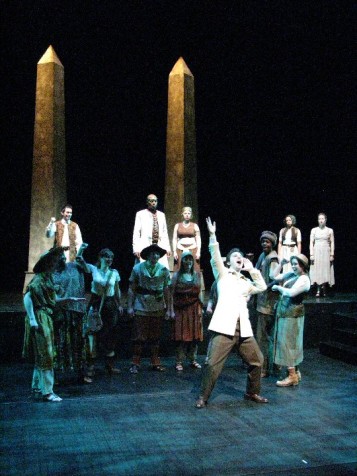 I bet the same thing happened with Antigone.

There’s another way to publish fanfiction. Re-write it to take out everything that ties it to the book it was written about. That’s honest enough. After all, the plot belongs to the writer, not the original creator. Take out anything you have borrowed from Twilight, for example, and re-write it as 50 Shades of Grey. Perfectly legal.

The thing is, there are legal rules about publishing fanfic. The owners of the art can open up the world of the story, or each individual story must be approved by the owners of the art. That’s how we got those Star Trek novels. They didn’t accept just any story; a writer’s story had to be approved for publication.

Then we have the idea of parody. You’ve seen parody movies, I’m sure. Airplane was a parody of disaster movies. You know what it didn’t do? Take a specific airport disaster movie, and steal its plot and characters. That’s plagiarism.

Fanfic websites, for the most part, survive legal matters for two reasons that are intimately attached. They are considered parody, and the writer is making no profit from the work of another writer. They are available for free, so the writer makes no money from someone else’s work. The writers also give credit where credit is due. They say flat out that the characters, world, etc belongs to someone else, and they don’t try to pass those things off as their own. Even for free, you can’t just take someone else’s words and use them yourself.

And then there’s this: 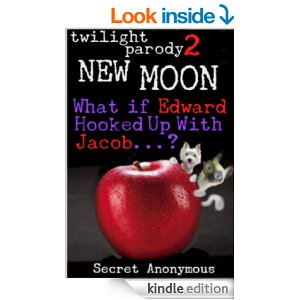 Not my cover, not my book, not my art. Notice how it’s written by “Secret Anonymous?” Mayhap they are worried about a bit of litigation.

I read an excerpt from this in the sneak peek view. It’s not parody. It’s no Airplane, making fun of a genre. It’s a writer that has stolen someone else’s characters and world, and is profiting by doing that. That’s not parody, that’s theft. It’s also not very good, but that’s beside the point.

WTF Amazon? What the fuck were you thinking? Just slapping the word “parody” on a cover does not protect one from plagiarism charges. This isn’t Pride and Prejudice and Zombies, where someone has taken a story in the public domain and had some fun with it. This is theft of copyrighted material.  The slight tongue-in-cheek writing style of the above example does not negate the theft of characters and world.

There are watchdogs that guard the gates. There are people all over the art world who notice when someone’s art is stolen and used without permission. Use that famous picture on your website, you might get a cease and desist letter. Use someone else’s words, same result. Unfortunately, Amazon does not seem very interested in receiving warnings that they are selling something that has been plagiarized. They only accept such statements from the owner of the content. That is a pretty weak way to do this. The watchdogs are necessary. It’s a big, big, world out there, and no one artist can keep an eye on the whole thing to see if someone steals their work. Bad form, Amazon. From a group that has big blanket rules that, for example, reject any self-published book with the word “virgin” on the title just in case it might have to do with underage sex, I expected better. At this rate, I feel like I am more likely to get a cease and desist letter for the pic I posted of that cover before the art thief gets one.

Do me and the art world a favor. Don’t pay money for stolen art. Don’t be fooled just because someone slaps the word “parody” on the cover. Don’t reward the thief.

I am a writer in Indiana who lives with two cats, two ferrets, and one fiance. I enjoy cheap coffee and expensive chocolate.
View all posts by JulianneQJohnson →
This entry was posted in Plagiarism, reading, writing and tagged Plaigiarism is alive and well and living at Amazon, When parody becomes plagiarism. Bookmark the permalink.

2 Responses to Parody vs Plagiarism