What is “Voice” in Writing?

Posted on November 21, 2016 by JulianneQJohnson

Recently, on a writing forum, a writer who was just starting out asked what “voice” was, and how could they get some. This question wasn’t about giving your characters unique voices, that’s a whole other kettle of colored horses. He was talking about a writer’s voice. The “voice” of an entire work.

“Voice” is a particular writer’s style of writing. It can be the style they write in all the time, or it can be project specific. Think about Neil Gaiman, or Tom Robbins, even Cormac McCarthy. These are writers with a strong and unique voice. Chances are, if I put up examples of all three (assuming you had read them, of course) that you could tell with little difficulty who wrote what piece. That difference is voice. They are all well written, but each has unique qualities that make it “sound” like a certain writer’s work. 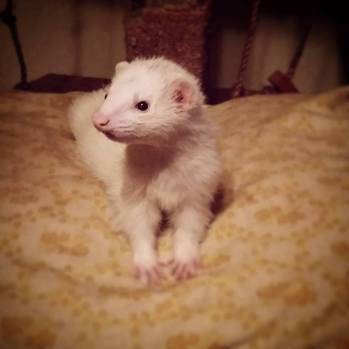 Know what time it is, Millie!  It’s time to play name that author!

“Hey,” said Shadow. “Huginn or Muninn, or whoever you are.”
The bird turned, head tipped, suspiciously, on one side, and it stared at him with bright eyes.
“Say ‘Nevermore,'” said Shadow.
“Fuck you,” said the raven.”

Hawaii once had a rat problem. Then, somebody hit upon a brilliant solution. import mongooses from India. Mongooses would kill the rats. It worked. Mongooses did kill the rats. Mongooses also killed chickens, young pigs, birds, cats, dogs, and small children. There have been reports of mongooses attacking motorbikes, power lawn mowers, golf carts, and James Michener. In Hawaii now, there are as many mongooses as there once were rats. Hawaii had traded its rat problem for a mongoose problem. Hawaii was determined nothing like that would ever happen again.

They heard somewhere in that tenantless night a bell that tolled and ceased where no bell was and they rode out on the round dais of the earth which alone was dark and no light to it and which carried their figures and bore them up into the swarming stars so that they rode not under but among them and they rode at once jaunty and circumspect, like thieves newly loosed in that dark electric, like young thieves in a glowing orchard, loosely jacketed against the cold and ten thousand worlds for the choosing. 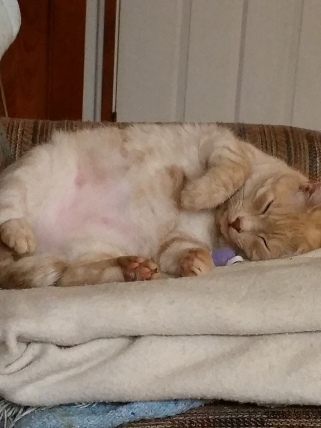 If Butters had a voice, he would tell you he loves his purple mousie.  As you can tell, Butters’ voice mostly says “Feed me.”

Read some authors that you admire. Note how they put the words together. Is it a bit snarky, like Gaiman? Is it a bit surreal, like Robbins? Is it a bit stream of consciousness, like McCarthy? What makes the writing sound like the writer’s voice?

Honestly, the only way I know to develop voice is to keep writing. As you put hours and hours into your writing, your own personal style will begin to show up. I wrote 5 novel length pieces before my voice started firming up. Then I started writing novels I hoped to publish. I’ve had feedback from agents and publishers that compliment me on my voice. It’s my plots that need work. They aren’t quite unique enough. Living is learning, so that’s what I’m working on now.

It’s time to vote! I submitted my book, Descending, to Kindle Scout. Descending has to get votes to be noticed by the Kindle editors. The final decision is up to the editors, a lot of votes don’t get you published, but you won’t get published without a lot of votes.

What to do: If you have an Amazon account and you want to help, go to this link https://kindlescout.amazon.com/p/1GSTCATCKN5TS and vote for Descending. Each Amazon account holder gets 3 votes for books they’d like to see published.

What’s in it for you: If Descending is chosen for publication, every person who votes for it gets a FREE advance copy of the e-book, and an opportunity to review, if you wish, before anyone else.

How you can help: Vote, if you can. Share this post with friends if you are willing. Vote now! Get a free e-book!

I am a writer in Indiana who lives with two cats, two ferrets, and one fiance. I enjoy cheap coffee and expensive chocolate.
View all posts by JulianneQJohnson →
This entry was posted in writing, Writing Advice and tagged Neil Gaiman is snarky as hell, What is voice in writing?, What makes a book sound like a particular author, Writing style. Bookmark the permalink.