Posted on January 10, 2017 by JulianneQJohnson

And, you can vote for your favorite stories. I plan to read them all! 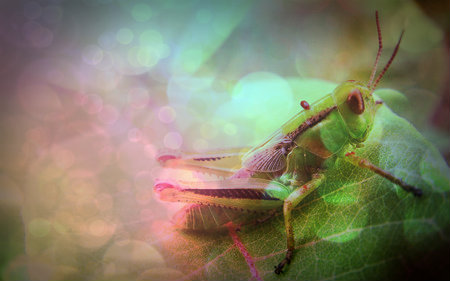 Charlie was the most handsome grasshopper in Kansas. Since the day he was hatched, all the other grasshoppers remarked on what a fine specimen of Orthoptera he was. His thorax was brown and he had broad patches of green. Red racing stripes graced his long jumping legs, and his antennae were twice as long as any of his clan. All his young life, Charlie was told by the elder hoppers that they expected great things from him.

The clan was known for its heroes. The founder of the Leafhopper clan was a mountain of a grasshopper named Thorn Highjumper. They said old Thorn ate a farmer’s entire crop of lettuce in one night, causing the hated farmer to pack up his pesticides and move away in disgrace. The clan still danced in the sunlight of the abandoned farm, free from meddling farmers with their poison and their cats.

When the Great Tar Barrier was erected near the clan’s nest, Thorn Highjumper single-handedly moved every egg pod to safety. He battled an opportunistic garden spider and won. Though he spent the rest of his life with only five legs, he remained the hero of the hoppers.

“That Charlie is going to be the next Thorn Highjumper.”

Charlie heard it a thousand times. So often did he hear the clan proclaim that he would do great things, he believed someday the world would give him his time to shine.

The days passed, and Charlie grew older. His body became long and he grew a handsome pair of wings that set off the racing stripes on his legs. While waiting for his great destiny, he practiced the music of his people day and night. The voices of the clan changed.

“When are you going to stop playing that crazy music and do something with your life?”

“When are you going to settle down and make egg pods?”

“What a disappointment. He’s no Thorn Highjumper.”

One day, when Charlie had heard one disparaging remark too many, he decided he’d had enough. He left the clan lands and hopped farther away than he had ever hopped before. Near the Great Tar Barrier he threw himself down in weariness and despair.

He was special. He knew he was destined for greatness. The clan could say what they wanted, none of their words changed anything. It was hardly his fault that the clan lived in such peaceful and happy times. There was no evil farmer to thwart or ravenous spider to destroy. Charlie could not be blamed if the world refused to send grand adventures his way.

If the clan didn’t want him, he’d leave. He’d find adventure himself. When he returned, his clan would sing songs about his feats of greatness.

Resolved, Charlie ventured even further away from the abandoned farm of his people. He hopped to the very edge of the Great Tar Barrier. Lost in his own thoughts of destiny, the foolish young grasshopper never saw the shadow descend.

A great pinkish thing with wriggling appendages covered Charlie and lifted him high into the air.

He had no idea what the goliath was saying, but it became clear as the wriggling appendages opened, that one of the smaller man-beasts had captured him. He’d never get to have his adventure if the man-beast ate him.

“Dad is never going to let you keep that, Lucy.”

“You can’t take him all the way to Indiana.”

“Sure I can. Help me find something to put him in. This driving trip is so boring. It’ll give us something to look at while we’re stuck in the car.”

The man-beasts were making loud noises, but they didn’t seem in a hurry to eat him. Charlie wanted to jump out of the pink thing that had grabbed him, but he couldn’t find an opening. Soon, the pink thing opened and he was tumbling through the air.

He landed on something so slick that it was hard for his many feet to find purchase. He could see the world around him, but some sort of clear barrier knocked him back when he tried to jump away and escape. A wave of green sifted down around him and a strange sound came from above. Whatever the clear barrier was, it had some sort of top on it. The ceiling of his small, see-through room was dark and had many tiny holes in it.

For several suns, Charlie lived in his strange small room. While the sun shone there was a feeling of great movement that vibrated up from his feet. At night, all was still and quiet. The little man-beast took his top off several times a day, removed the old green stuff, and put fresh things in his room for him to eat. Often there were strange plants, foreign and delicious.

The constant movement stopped. The little man-beasts made many noises.

“We’re home now, Lucy. What are you going to do with hoppy?”

“I guess it’s not very nice to keep him in the jar too long. I’ll let him loose in the garden!”

His room bounced and jostled, the ceiling was removed, and Charlie tumbled through the air. He landed on a cabbage plant. Well, that was unexpected, but it was certainly preferable to eat than to be eaten.

In time he met a small clan of grasshoppers that lived in the garden. The new hoppers were a smaller race than Charlie, and admired him for his great size and red stripes. They sang songs of him and his great journey from a far away land. Charlie Worldhopper became the leader of his new people. As destinies went, it was pretty fine. 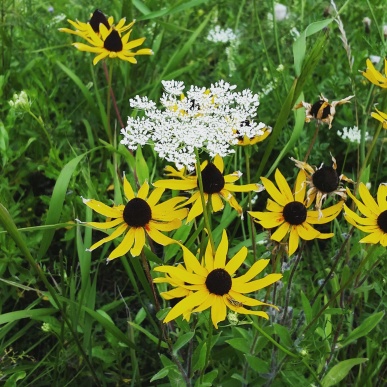 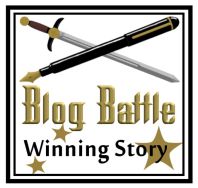 I am a writer in Indiana who lives with two cats, two ferrets, and one fiance. I enjoy cheap coffee and expensive chocolate.
View all posts by JulianneQJohnson →
This entry was posted in Blog Battle, Short Stories, writing and tagged A Tall Tale short story, Charlie the Grasshopper. Bookmark the permalink.