Posted on January 13, 2017 by JulianneQJohnson

There’s much confusion about the different styles of Point of View (POV) in novels, and exactly what each of them mean. I’ve just read a plethora of comments on the subject, and some clarity is desperately needed. Here I am, intrepid reader, to explain it as best I can. I’m not a POV expert, I don’t even play one on TV.

First Person- The entire story is told by the main character. The MC is the narrator. If the MC doesn’t see it, hear it, experience it, neither does the reader.

I wish I was a woman of about thirty-six dressed in black satin with a string of pearls.
–Daphne du Maurier, Rebecca

I was very sickly as a young kitten.  So much so that the giant food givers took me from my feral mother and forced me to live inside their strange cave.

Second Person- The entire story is told by a character secondary to the MC. It is told from the secondary character’s eyes, and anything they don’t directly experience, the reader doesn’t either.

I couldn’t forgive him or like him, but I saw that what he had done was, to him, entirely justified. It was all very careless and confused. They were careless people, Tom and Daisy—they smashed up things and creatures and then retreated back into their money or their vast carelessness, or whatever it was that kept them together, and let other people clean up the mess they had made.
— F. Scott Fitzgerald, The Great Gatsby

I don’t know why Scamper was such a sickly child, but I took her under my wing and showed her how to live in the giant food giver cave.  The tiny thing caused a great change in the cave, and with her influence, the squishy food appeared more frequently.

For instance, on the planet Earth, man had always assumed that he was more intelligent than dolphins because he had achieved so much—the wheel, New York, wars and so on—whilst all the dolphins had ever done was muck about in the water having a good time. But conversely, the dolphins had always believed that they were far more intelligent than man—for precisely the same reasons.
–Douglas Adams, The Hitchhiker’s Guide to the Galaxy

Scamper got well and began to grow like a weed.  Butters looked after her and tried to steer her clear of alcohol and catnip abuse.  For Scamper’s part, she was happy to be out of the cold.  Butters, he loved the company.  Neither realized an uncomfortable problem was on the horizon.

Third Person Objective- The narrator is not a character. The narrator is completely neutral and relays no feelings or opinions of his own. The narrator does not know the thoughts or feelings of any of the characters. They are the “fly on the wall” relating what can be seen and heard. Dual-Narrative and Multi-narrative often fall in this category, though they can occur in other Third Person narratives as well.

The American and the girl with him sat at a table in the shade, outside the building.
–Ernest Hemmingway, Hills Like White Elephants

The cat peered at the woman from his place on the green chair.  The woman made a clicking noise with her tongue to keep the cat’s attention while she took several pictures.

Limited Third- (Sometimes called Close Third or Deep Third.) The narrator is not a character of its own right, but tells the story from the point of view of a single character. If it doesn’t happen around the MC, the reader doesn’t know about it. Limited Third lets the reader experience the thoughts and feelings of the MC.

“Do you remember me telling you we are practicing non-verbal spells, Potter?”
“Yes,” said Harry stiffly.
“Yes, sir.”
“There’s no need to call me “sir” Professor.”
The words had escaped him before he knew what he was saying.
— J.K. Rowling, Harry Potter and the Half-Blood Prince

Some will say that the Harry Potter series falls into Omniscient, because the entirety of the work is not from Harry’s viewpoint. However, there is no godlike narrator present. We experience around 95% of this story from Harry’s eyes. It most closely resembles third person limited with a few spots where the viewpoint is cheated. This “cheating” is done well and to good effect.

There was no doubt that Butters loved his kitten.  Sometimes he thought the kitten loved him a little too much.  There were now periods of strange yodeling and Scamper kept sticking her butt in his face.  He wasn’t certain what was going on, but he knew he didn’t like it.

Lying on your back is the best way to sleep in the world. She likes to snuggle up next to him, but thinks he’s very wiggly.  If only the giant paw would pet my belly.  Maybe I’ll bite it.

Now that I’ve told you all of that, I’ll tell you it’s all wrong and useless! All right, not exactly. The above is a bare generalization of POV characteristics, but there are no hard and fast rules. POV is malleable. The above examples can be mixed, bent, and cheated, and done so in an effective way that does not take away from the story. However, as with any chunk of grammar or writing style guidelines, writers who break the rules need know the rules in the first place, and break them with intent and purpose rather than through laziness.

Another issue is not everyone agrees what the rules and characteristics of each POV are. You will find articles that argue Close, Limited, and Deep Third are three separate things, while most agree they are three words used to describe the same thing.

Keep in mind that what’s popular in POV changes with the times, just as it does with other writing style choices. First Person and Limited Third are very hot with readers right now, and Omniscient is far less popular. Different genres also have specific POVs that are popular in that genre. That said, write in the POV that suits your story best. If it’s well written, it will be read.

My best advice to writers starting out is to pick a POV for your book and stick to its rules without cheating. Wait until you are conversant with all the traditional styles before you start to mix and match. Look for head-hopping in your narrative and kill it with fire. If what you want is Omniscient, then write Omniscient, create your godlike narrator and don’t head hop. 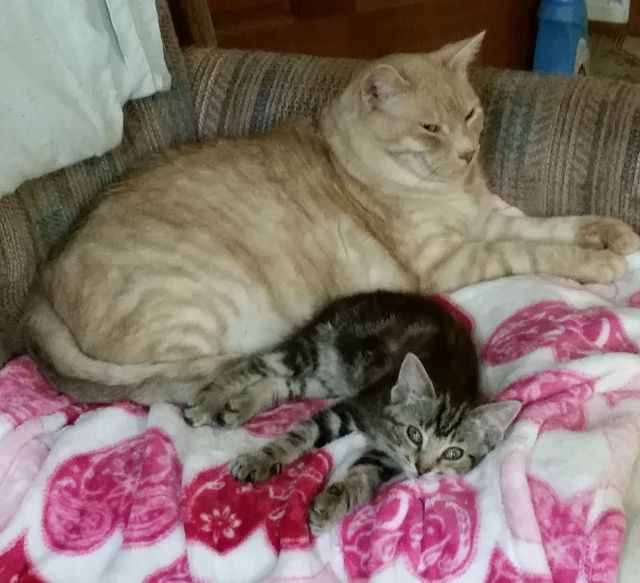 Butters and Scamper want me to tell you not to head hop.  It annoys them no end.

I am a writer in Indiana who lives with two cats, two ferrets, and one fiance. I enjoy cheap coffee and expensive chocolate.
View all posts by JulianneQJohnson →
This entry was posted in Narrative Point of View and tagged Definition and use of narrative POV- now with more cat!, Different types of POV explained with kitties., POV trends in writing.. Bookmark the permalink.

5 Responses to Let’s talk about Narrative Point of View!