Grammar Gripes – Prepositions at the end of a sentence

Posted on January 24, 2013 by JulianneQJohnson

Prepositions at the end of a sentence. I don’t care who you are, or where you are from, at some point in time you have heard that this is a big no-no. I myself had had grammar teachers and college professors say that it simply isn’t done.

Except that it is.

Lately, I’ve been reading some blog posts, and some on-line references that study this phenomenon. The overwhelming consensus made by those that know what they are talking about is that the whole Don’t-You-Dare-Put-A-Preposition-At-The-End-Of-A-Sentence thing is a huge and far-reaching myth that has been with us since 1672, when poet and essay writer John Dryden decided that it was not to be done.

Let me make that clear. All grammar specialists, including Webster’s and Oxford’s, agree that it is not only ok, but sometimes more correct to end a sentence with a preposition, but one dead poet says it’s a crime, and that is still haunting writers to this day.

Let’s look at some examples!

Taking into consideration the awkward, almost uber-formal, sound of the incorrect sentences, one might mistakenly assume that Dryden was simply reflecting an opinion of the writing style of his time. Closer examination shows that it was still just him. There are quite famous writers from before his time and after that rightly ignore what Dryden had to say.

The following example’s are from Merriam-Webster’s Dictionary of English Usage:
From Ben Johnson’s Caitline, 1611, “The bodies that those souls were driven from.”
From Shakespeare’s Macbeth, 1606, “Thou hast no speculation in those eyes/ Which thou doth glare with.”
From John Bunyan’s Pilgrim’s Progress, 1678, “Now,” thought he, “I see the dangers that Mistrust and Timorous were driven back by.”
From Jane Austen’s Mansfield Park, 1814, “I know what you are thinking of.”

Certainly there are sentences where the preposition is awkward and sounds wrong when put at the end of a sentence. I still think anyone who thinks that Miss Austen should have written “I know of what you are thinking,” is a wrong-thinking grammar Nazi.

So, in your own writing, I urge you to write such a sentence the way it sounds most natural. It is fairly obvious to discern what sounds awkward and absurd. I appeal to you all not to let one dead poet make you jump through flaming grammatical hoops. I implore you never to write such a sentence as, “I was wondering as to from who you received the gift.” It’s perfectly correct for you to say “I was wondering who you received the gift from.” If you fall prey to those that believe the intrusive myth that this is incorrect, you can either ignore them, or point them towards Oxford and Webster’s.

Now, I’ll leave you wondering what it’s all about. 🙂 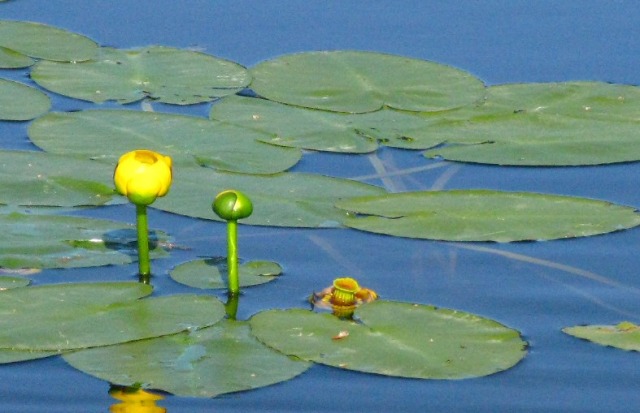 I am a writer in Indiana who lives with two cats, two ferrets, and one fiance. I enjoy cheap coffee and expensive chocolate.
View all posts by JulianneQJohnson →
This entry was posted in Grammar, writing, Writing Advice and tagged grammar, Ontario, packwash lake, prepositions, prepositions at the end of a sentence, water lilies, writing, writing advice. Bookmark the permalink.