Posted on April 7, 2017 by JulianneQJohnson

We all start out somewhere. None of us are awesome novel writers right off the bat. That’s to be expected. No one goes straight from “I think I might write a book” to Stephen King, writing superstar, just as no one goes from pre-med undergraduate school straight to doing brain surgery.

A writer has to get some practice, get some feedback, and grow their writing voice and style before they are going to write a great book. Unless, of course, one is a prodigy. Let’s face it, most of us are not prodigies, and that’s okay. Mr. King wasn’t a prodigy either.

“So, what are some of the most common newbie writer mistakes?” you seem to ask.
Never fear, awesome reader, I am going to make a list. 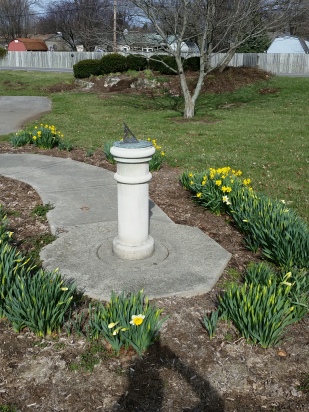 Some of the first spring daffodils I enjoyed this year.

1- Beginning a Book Too Early

Yes, it is, and it’s the most boring way to do it. Your book should begin with something happening. It doesn’t have to be a life or death situation, but it should not be world building or character study. It also should not be back story. Sure, your character may have grown up as a foster kid on a wombat ranch, but you can mention that later, if it makes sense to.

I am working on a book where the MC is a guy who is always in the right place at the right time to save someone’s life. Where do I start the story? Do I talk about the city he lives in? Do I give a dissertation on what kind of guy he is? Do I show him in a typical day at his work?

Hell, no. I open the story with him saving somebody. As we go along, you find out things about my MC, where he works, and where he lives, in bits and pieces as it’s relevant to the story I’m telling right now. Remember it’s okay to have a bit of mystery going in and if your book is engaging, the reader will gather those bits and pieces as the story goes along.

Start your story at the part where it gets interesting. Fit the other bits in later.

No reader wants to read sentences that are all the same type, sentence after sentence, blah blah blah. You have to learn to mix it up a bit. Let me give you an example. The biggest mistake I see in green writers is every sentence starting with the subject first.

I see the boy’s lap belt lift and rise like a snake in slow motion. The coaster hits the third hill. The boy begins to rise out of his seat. I stare in horrified fascination.

Beside me, the boy’s lap belt lifts and writhes like a snake in slow motion. The coaster hits the third hill. As I stare in horrified fascination, the young boy begins to rise out of his seat.

Even in that short example, there’s a crazy big difference. Which one do you want to read?

This is a bugaboo that really hurts a ton of newbie writers. I did a post on narrative point of view here. Read it. Know the different types of point of view, study them, and pick one of them. Then write your book. No cheating. No jumping from one type to another in the same book. If you write in omniscient, then have that Godlike narrator telling the story. Do not just jump from character to character willy-nilly as the mood suits you. Even better when you are starting out, write in first person, or limited third, until you get some writing under your belt. It will keep you from head-hopping. Don’t know what limited third is? Well, you better find out before you write another word. Do read that post on narrative point of view. It will help.

If your first book is between 200k and 300k words, chances are it needs some serious editing. Even if you are writing Science Fiction, Historical Romance, or High Fantasy, anything over 150k words is suspicious. Yes, it’s possible you have a trilogy on your hands, but what’s most likely is that you don’t know how to edit effectively. I knew a writer that had a behemoth at 250k words, and after a good content editor got hold of it, ended up with 90k. And the writer was stunned to admit that the book was better for the cuts. Huge chunks of writing that were not necessary to the plot were hacked out, and the book was better off without them.

If you have a book so giant that places like Createspace can’t even print you a proof, then you have trouble. It might not be as simple as cutting the book into smaller pieces. In a trilogy, there’s an ongoing story arc, but each book in the trilogy must have a beginning, middle, and end. Cutting one story into three pieces doesn’t cut it. Consider doing some major pruning or work with a professional content editor to find out where to prune.

The opposite of #4 is that writer who writes 7k words and thinks they have a novel. Nope. That’s a short story. Here’s a rule of thumb rundown:

Now, keep in mind that if you write novelettes or novellas, you might want to bundle several together if you want to publish. Shorts stories would need a herd to publish. Also note that 40k is very short for a novel. If you publish a Novel that’s between 40 and 60k, then you should describe it as a “fast read” in your description. Readers will be angry, as well they should, if they pay money for a book and then discover that’s it’s a really short book. 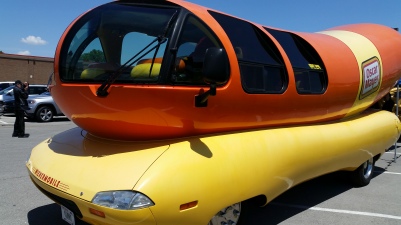 Julianne Q Johnson, second child to the awesome Gene Johnson, sat at her Cyberpower PC typing away at her black ergonomic split keyboard in fits and starts. She wore comfy clothes, some black stretch jeans that had seen better days and a faded Disney t-shirt that had Mickey Mouse, Pluto, Goofy, and Donald on it. The t-shirt was a steel grey with an artfully faded silkscreen on the front. The keyboard and mouse were set up on her old, brown-stained, wooden roll-top desk, and Supernatural was playing on her second screen attached to the wall under the bookshelf that she had painstakingly put up herself. Julianne was a bit out of sorts because she wanted to finish the awesome and sparkly blog post for her writing blog on WordPress, but she had a migraine that was making her grumpy as hell. Her fiancé, Brian–who was wearing khaki shorts and a tie dyed t-shirt–distracted her by picking up both adorable ferrets and being all cute with them. Frankie was a big Champaign hob and Millie was a tiny white jill.

Julianne typed her blog post in fits and starts due to an annoying migraine.

Some description is interesting and needed to further the plot. Describing every damn thing is ponderous and boring.

Rushing is the opposite of describing too much. It is when the writer rushes from plot point to plot point without any description or character thoughts and feelings.

Equally as boring as over-describing. 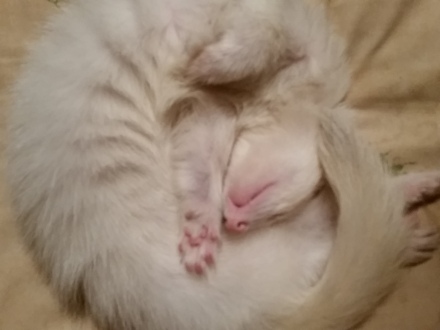 A puddle of Millie

The following are also common things to look for in your writing, and there are tons of articles in internet-land that describes them. Keep in mind that any advice that tells you “Never do this…” is a bit ridiculous. There’s a time and place for everything, folks get into trouble when they do something too much.

Telling instead of showing
Word overuse (using the same word or phrase too many times or too close together.)
An extreme overuse of -ly adverbs (I believe in using all the words, but not to excess.)
Willy-nilly use of unique dialog tags
Using participle phrases incorrectly
Overuse of filtering words- look, saw, heard, etc
Boring verb choices (Ran instead of dashed, rushed, hurried, sprinted)

That’s all for today. Keep being awesome! 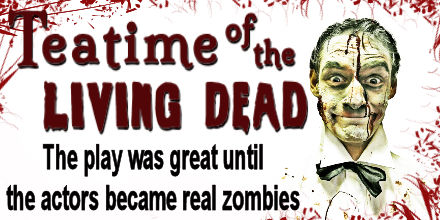 Kindle Scout is an awesome program where people nominate books they would like to see published. Nominations won’t guarantee success, the editors have final say in who gets published by Kindle Press and who doesn’t. However, nominations can help get their attention.

I am a writer in Indiana who lives with two cats, two ferrets, and one fiance. I enjoy cheap coffee and expensive chocolate.
View all posts by JulianneQJohnson →
This entry was posted in Fiction, Habits in writing, Kindle Scout, Teatime of the Living Dead, writing, Writing Advice and tagged Common issues in writing, Problems for the beginning writer to watch out for., Writing better.. Bookmark the permalink.